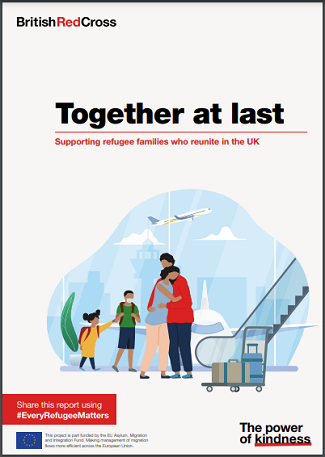 A new report released earlier this month by the British Red Cross takes a detailed look at the organisation’s Family Reunion Integration Service (FRIS) programme, which provides support and assistance to refugee families reuniting in the UK. United.

The 76-page report,Together at last: supporting refugee families reuniting in the UKdownloadable here.

The British Red Cross launched FRIS in January 2019 with Barnardo’s and Queen Margaret University. It covers all four UK countries and is partly funded by the European Union’s Asylum, Migration and Integration Fund (AMIF).

The program was launched to address the lack of formal support for refugee family reunification in the UK. FRIS helps families find housing, navigate the welfare system, register with health services and send children to school.

In its new report, the British Red Cross presents the findings of three years of the FRIS programme, drawing on data and testimonies from more than 1,100 families who have been supported. It details the experiences of refugee families reunited in the UK and highlights the main challenges they face, as well as identifying key measures that would improve their chances of successfully integrating into their new homes.

Through separate sections, the report examines families’ arrival in the UK and their subsequent difficulties in accessing housing, work, health and education.

The British Red Cross summarized the main findings of the report as follows:

The British Red Cross said: “None of the challenges reunited refugee families face and highlighted in this report are deliberate. Instead, they are unintended consequences of policies and practices that were not designed with them in mind”.

The report makes a number of recommendations, based on best practice developed under the FRIS programme, which the British Red Cross believes would improve the experiences of refugee families reunited in the UK and their prospects for successful integration. .