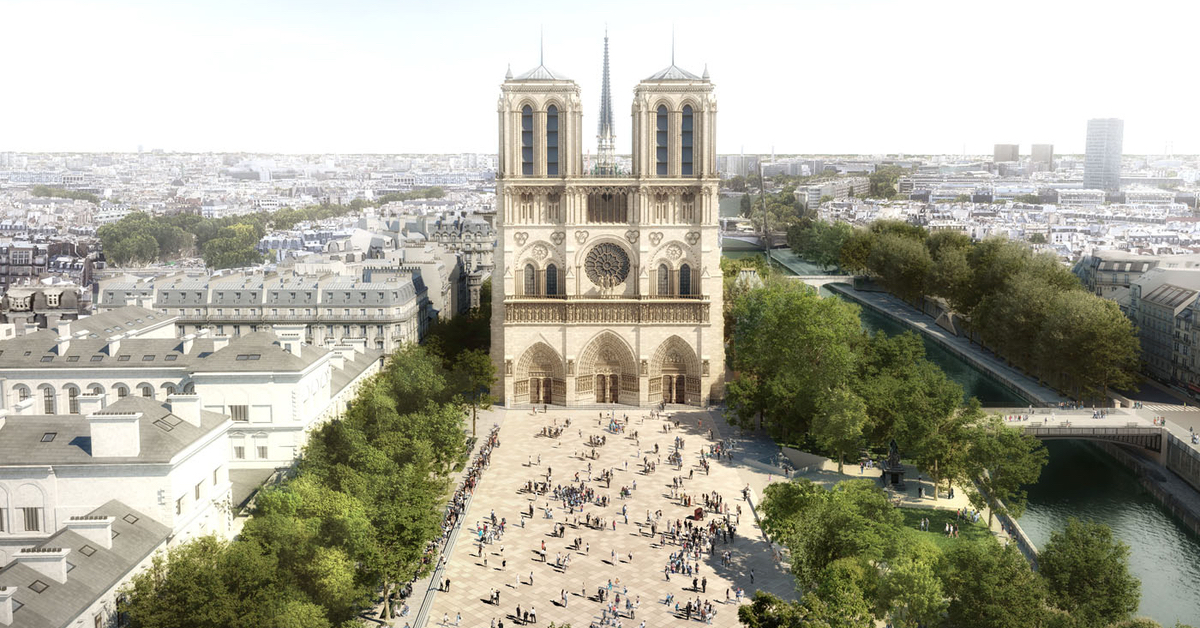 Restoration work on Notre Dame Cathedral in Paris, which was nearly destroyed by fire in 2019, is still underway, but another project is also about to begin. This is a redesign of the surroundings of the cathedral.

The redesign of the cathedral forecourt involves work to make Notre Dame more accessible to the millions of people who come to see it every year while planting more trees and naturally cooling the neighborhood. All in all, the prospect will help to mitigate the rise in temperatures caused by climate change.

Notre-Dame “must be left in its beauty and that everything around it be a showcase for this beauty”, said Anne Hidalgo, mayor of Paris, according to The hill. She added that “a city like ours can no longer think outside of climate change”.

The cathedral, which took more than 300 years to complete, is also known for its historic neighbors: the Louvre, the Eiffel Tower and Place de la Concorde. In fact, the entire district, known as “Paris, banks of the Seine”, is listed as a UNESCO World Heritage Site.

The fire is believed to have been caused by an electrical short and caused extensive damage to Notre Dame on April 15, 2019. Such damage included the collapse of its 315-foot lead and wooden spire , a landmark of the Paris skyline, on the stone roof of the cathedral. Immediately after the fire, French President Emmanuel Macron announced that work to rebuild Notre Dame would be completed within 5 years, coinciding with when Paris will host the 2024 Olympics.

This plan seemed ambitious, especially when the restoration efforts suffered numerous setbacks. For example, a large amount of toxic lead from the roof of the cathedral was deposited on the surrounding area, necessitating lead decontamination efforts. Then severe winter storms caused delays ahead of France’s COVID-19 lockdown, further delaying work.

Now, however, restoration work is underway and on schedule.

The City of Paris has organized an international architecture and landscape competition for the redevelopment of the forecourt of Notre-Dame Cathedral. Officials from the city, the diocese of Paris and the task force in charge of the reconstruction of Notre-Dame were chosen as the jury of the competition. The jury also consulted local residents and businesses for feedback.

The design includes extending and merging the parks around Notre-Dame to create a “clearing” surrounded by trees for better viewing of Notre-Dame as well as creating new views of the Seine, according to The Guardian. Planting more trees will also create more shade for visitors.

Other projects plan to transform a former underground car park into an underground footbridge which opens onto the banks of the Seine, but which also provides access to a reception center and an archaeological museum, explains the City of Paris.

Finally, the plan also calls for the construction of a ground cooling system “which will send a 5 millimeter sheet of water to the square in front of the cathedral during the summer”. The Guardian Remarks. “This will lower the temperature of the area by several degrees, produce a microclimate around the cathedral and create a shimmering, reflective foreground for tourist photographs.”

You can find out more about the redevelopment of the forecourt of Notre-Dame de Paris cathedral here.

Also be sure to visit our coverage of Paris and France, including: