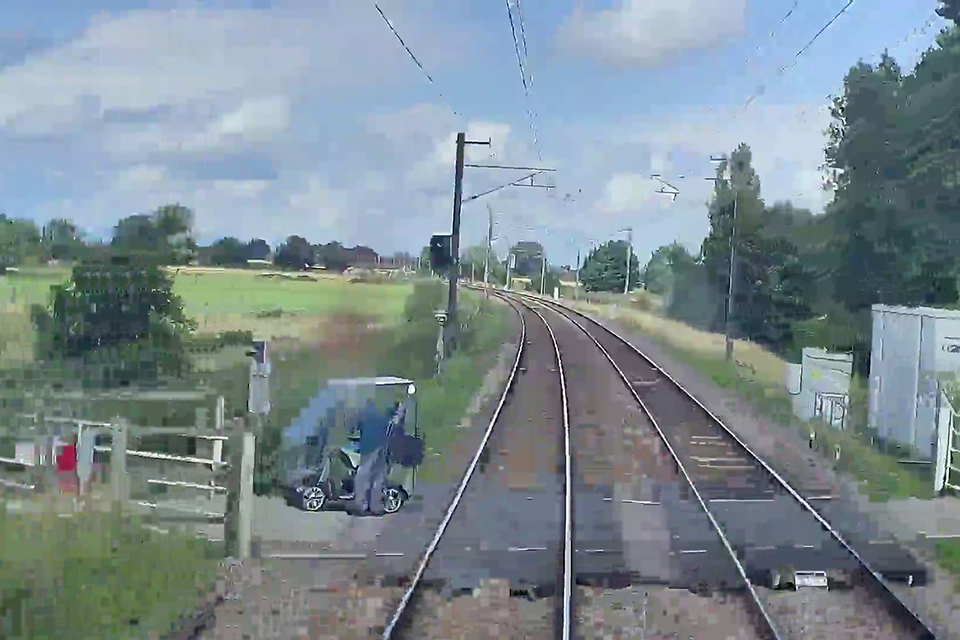 Collision at level crossing worked by a Burgess Drove user

At approximately 2:33 p.m. on August 9, 2021, a train operated by Greater Anglia crossed the Burgess Drove level crossing near Waterbeach and struck the rear end of a mobility scooter that was inside the passage area, next to the lower side. portal. The mobility scooter user was in close proximity to the scooter when the collision occurred, but was not injured. The scooter sustained minor damage.

The RAIB was notified of the collision by Network Rail and gathered evidence from the rail industry to conduct a preliminary examination of the circumstances of the accident. The RAIB concluded that the accident occurred because the mobility scooter user was unable to complete his crossing of the railroad tracks in the time available between the start of the train approach warnings, provided by a red light and an audible alarm at the level crossing, and the arrival of the train. The RAIB estimated that, for the reasons explained below, the user would have needed approximately 100 seconds between the start of the opening of the first gate and the complete closing of the second. However, the warning of an approaching train would only occur approximately 40 seconds before it arrived at the crossing.

The RAIB found that the Burgess Drove user was unlikely to have been physically fit enough to complete the four separate foot crossings required to operate the traverse user in the manner required for a user to walk. vehicle and that was probably the reason they used the crossing in the same way as a pedestrian. This would have seen them first opening the approach door, moving the scooter forward, closing that first door, then advancing over the level crossing to the exit door. After opening the exit door, they walked forward until they left the level crossing. The RAIB estimates that this would have taken around 100 seconds, after which the user would have closed the exit door behind him.

The RAIB has reviewed the findings of its preliminary examination and has decided not to conduct a further investigation into the accident. The RAIB has already investigated an accident at the Alice Holt crossing on October 5, 2016 (RAIB report 14/2017). This investigation resulted in a recommendation, addressed to Network Rail, to improve the advice given to level crossing managers so that they can better assess the risk to vulnerable users, including mobility scooter users, at crossings. upgrades that rely entirely on the eyes and listening of users. for trains. As the user who worked at the intersection at Burgess Drove is equipped with red lights and an audible warning indicating when it is dangerous to cross, he is not covered by this recommendation. The RAIB has therefore written to Network Rail to encourage them to extend the intent of this recommendation to all user-constructed level crossings that the public has the right to use. This letter was copied to the Office of Rail and Road, the safety authority for the main railway in Britain.

Make sure you check your vacation insurance checklist at least twice

How to prepare for a road trip