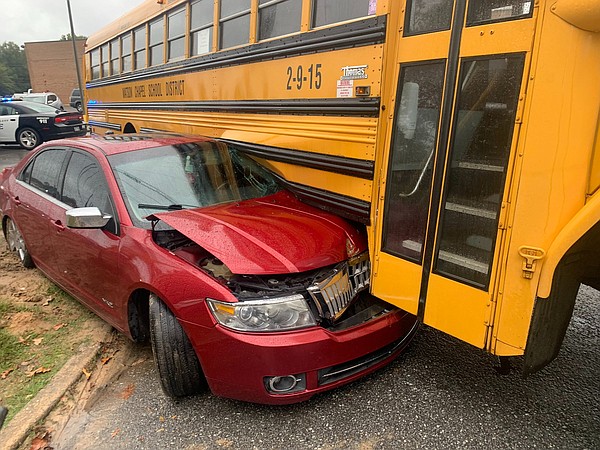 Collision of a school bus, the car does not cause any injuries

A Watson Chapel School District bus was involved in a collision with a luxury four-door vehicle at the intersection of West 28th Avenue and Apple Street in Pine Bluff around 3:30 p.m. Thursday.

District Superintendent Andrew Curry said no one on the bus or in the car was injured. Curry said there were 15 elementary school students on the bus, as well as the driver, who he said is subject to the state prescribed protocol of being tested for drugs and alcohol before d ” be allowed to drive a school bus again.

Curry added that he believed the driver, whom he declined to name, would be negative.

Pine Bluff Police Public Information Officers said a report on the crash would likely not be available until this morning, given the number of people on the bus.

The vehicles, Curry said, were both heading east on the 28th when the bus made a wide right turn from the inside lane eastbound on Apple and the outside lane car crashed into the bus. The photos show that the car’s front driver’s side quarter panel hit the bus’s bottom panel, right next to the bus door, and came to rest at the corner of 28th and Apple.

â€œThe majority of the children on the bus were placed on another bus, which then completed the ride,â€ said Curry. He added that every student needs to be considered before they can be handed over to their parents or guardians.

Curry said he took the crashed bus back to the district garage where it would be inspected. The students involved “more than likely” will take another bus today as the district struggles to get the parts it needs due to a supply shortage, he said.

New Years, New Heat: Miami eliminates Brooklyn Nets in contention with two things they never did last season, and one they built towards