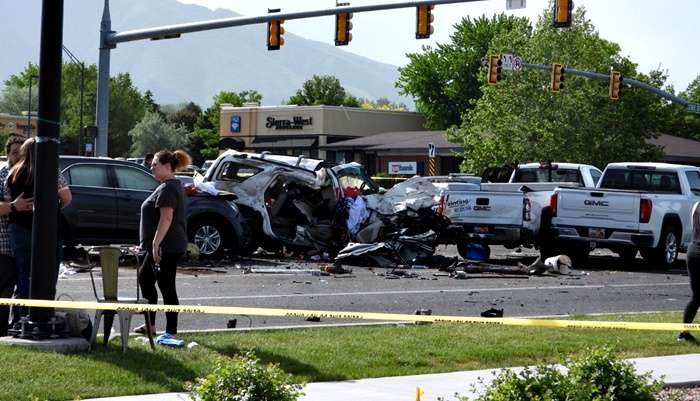 SANDY, Utah, May 27, 2022 (Gephardt Daily) — Police have released the name of the driver who died in a nine-vehicle collision Friday morning on State Street in Sandy.

Marylee Benavidez, 35, of Sandy, was the driver of the white Toyota 4Runner heading north on State Street. She died of her injuries. A German Shepherd dog in his vehicle also died in the crash.

The driver of the gray Ford F-150 traveling westbound on 10600 South has been identified as Sam Beck, 25, of Sandy. No information was available regarding his condition.

Police confirmed later Friday that the white Toyota was traveling at excessive speed when it entered the intersection at 10600 South on a red light and collided with the gray Ford.

“Right now it’s a pretty dynamic and expansive scene,” Sandy Police Lt. Dean Carriger told the Gephardt Daily shortly after the crash. “Due to the large debris field, as well as fatalities, the crash reconstruction team is on the scene and the area will be closed to north and southbound traffic likely for three hours.”

It took several hours to complete the on-site investigation and clear the area.

Sandy police say the investigation is ongoing to determine if drugs, alcohol or other factors may have contributed to the crash.