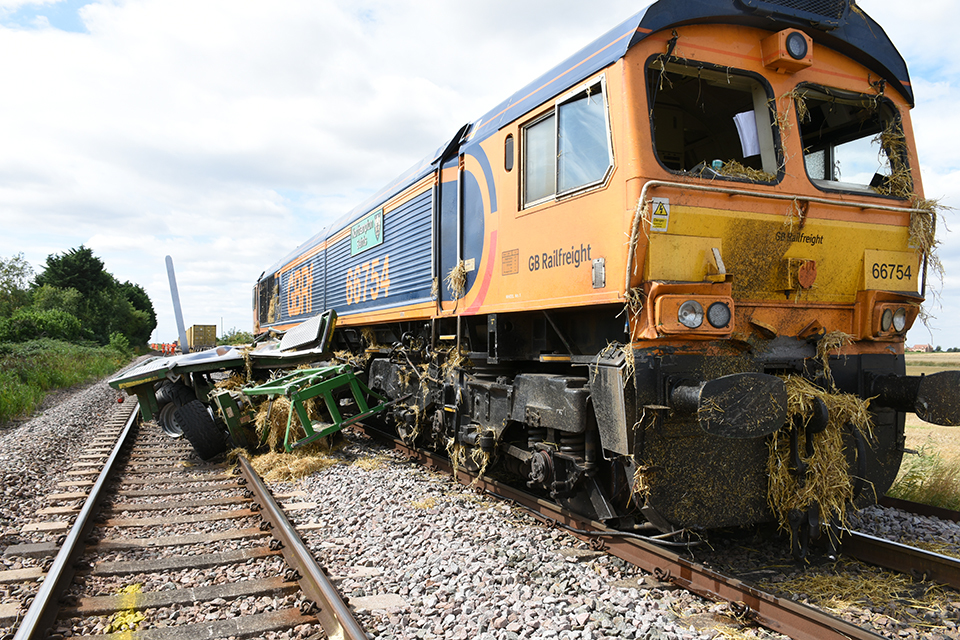 At 9:01 a.m. on August 19, 2021, a freight train consisting of a Class 66 locomotive and 36 container cars struck a loaded farm trailer at the Kisby level crossing near March, Cambridgeshire. The train driver applied the train’s emergency brake approximately 6 seconds before the collision, but the train was still traveling at approximately 93 km / h (58 mph) when it struck the trailer.

As a result of the collision, the trailer separated from the tractor pulling it and was then dragged by the train. The front axle of the locomotive and an empty car in the middle of the train also derailed. The train derailed for approximately 780 meters before stopping.

Both train and tractor drivers suffered shock as a result of the crash and the train driver was also treated for minor injuries. The locomotive sustained significant structural damage during the accident, and the level crossing and track equipment was also significantly damaged. Rail services were disrupted on both lines for four days while the train was recovered and repairs were made to the track and signaling infrastructure.

Our investigation will seek to identify the sequence of events leading up to the accident, including the actions of the tractor driver and other users of the crossing. It will examine how the crossing was managed and how the risks associated with its use were assessed and mitigated by Network Rail.

We will publish our findings, including any recommendations for improving safety, upon completion of our investigation. This report will be available on our website.

2 growth stocks that are shaping the future of technology

How the hurricane season can impact your home and auto insurance, expert says