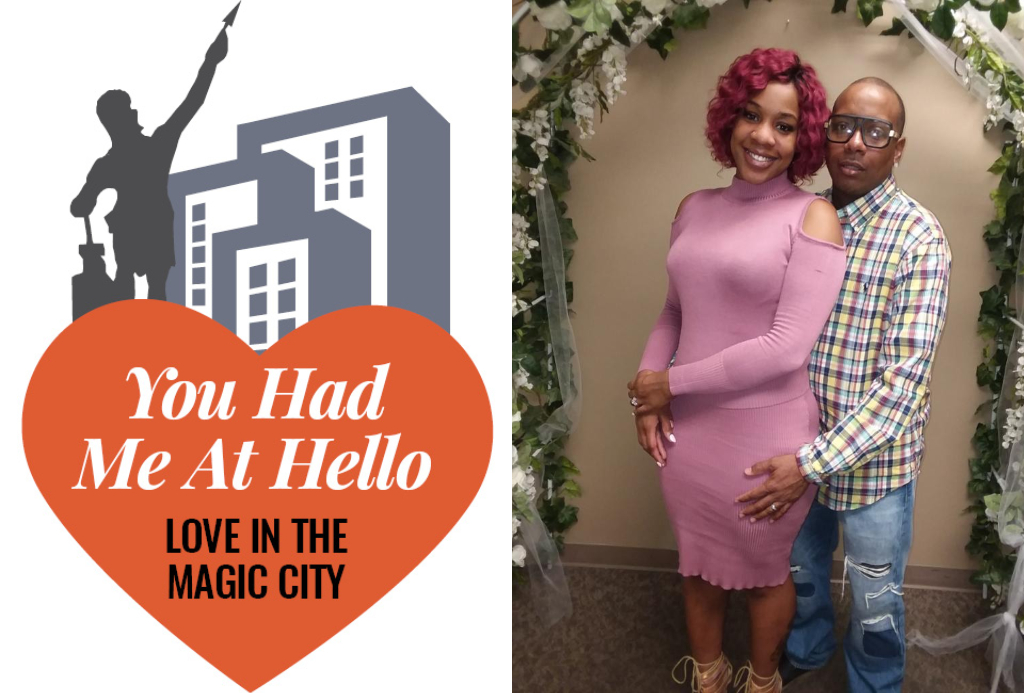 Special for the Birmingham Times

“You Had Me at Hello” highlights married couples and the love that unites them. If you would like to be considered for a future “Hello” column, or know someone, please send applications to Barnett Wright [email protected] Include the couple’s name, contact number(s) and what makes their romance unique.

Meet: End of April 2015, in East Lake. TaNeiqua was visiting a friend at her apartment complex when she and Jamare bumped into each other and said hello in passing. A week later, they saw each other again.

“…we were sitting outside having a barbecue at [her friend’s place in East Lake] and he came and whispered over my shoulder ‘You know you’re gonna be mine, right?’ and I just looked at him like he was crazy,” TaNeiqua said. “He looked like a guy who had options, so I didn’t take him seriously, I laughed.”

Jamare thought TaNeiqua “was gorgeous. “I was hoping to see her again because I had to move… Then I ended up seeing her again [a couple of weeks later after the barbeque] across town at a gas station and said “I caught you, now let me go on and get your number before you disappear,” Jamare said.

First date: June 2015, at a party in Woodlawn at an event center. They attended as guests along with Jamare’s uncle, Richard.

“I remember we danced all night, and then we ended up at our favorite place. [a chicken/Chinese food joint on 3rd Ave on the West Side] to get wings…wings are our love language,” TaNeiqua said.

“We had fun dancing and having fun with my family members. And after the wings, we had to cross the city, we took a turn and ended the date like that,” Jamare said.

Round: Things went fast for TaNeiqua and Jamare. They moved in a week after their first date, after what started as a daytime hangout turned into their first night together.

“…he called me and asked me to do my bonus girl [JaKiyah’s hair, who was then 6] …I went to do her hair and it was getting late so I ended up spending the night and the next morning I needed to get some clothes and he drove me home [to pack a bag], and when I came out with a little gym bag, he said, ‘is that all you’re gonna bring? Are you going to get the rest of your things? And me [was in disbelief] and he said, ‘you’re moving in aren’t you?’…. We took all my clothes and stuff and put them in the trunk of his Monte Carlo and we’ve been stuck like glue ever since,” TaNeiqua said.

“It was like a head-on love collision,” she added. “I can’t understand it. It was fast as a bullet train, I’ve never fallen in love like that and certainly not that fast. My grandmother thought I was crazy [as she] we watched him and I take out my stuff a week after we met him.

“I had to go straight there,” Jamare said. “I wasn’t playing, I wanted her to move in as soon as possible. I said to him: ‘If you want to move in, move in now’.

Proposal: November 10, 2017, at their home in East Lake. “I had just come home from work and he asked me if I loved him, and I said ‘yes, of course’. Then he asked me if I really wanted to be with him, and I said ‘yes’, then he just asked me ‘will you marry me?’ “, said TaNeiqua. “And of course, I said ‘yes’. He got up to put the ring on me, but he didn’t know which finger to put it on,” she laughed. “We hugged and we kissed and we just talked, and he was just telling me how much he loved me and cared for me, and he shed a tear and told me he didn’t see himself with someone other than me. Then we went [in the other bedroom] and told her grandmother, Mrs. Mary, that she was living with us at the time.

Jamare said, “I shed a tear because I fell in love with her. Of all the women, she is the one who has marked me the most. . . and that made my grandmother [Ms. Mary] happy because that’s what she wanted us to do it the right way and I’m glad we did it before she passed [in Feb. 2021].”

The wedding: At the Birmingham Courthouse. TaNeiqua wore a light pink sweater-skirt ensemble and Jamare wore a polo shirt and jeans.

The most memorable for the bride was “after [the nuptials] we went to Railroad Park [in downtown Birmingham] and took pictures and got a room downtown at the embassy and spent the whole weekend in disbelief that we had actually gotten married,” TaNeiqua said.

Most memorable for the groom “was doing something that was new to me, I got married. It really changed my life, it made me a grown man, it made me grow,” Jamare said.

The couple spent their honeymoon at the Embassy Suites in Birmingham. “We made sweet memories in our bedroom hot tub,” TaNeiqua laughed.

words of wisdom“Go at your own pace, do your own thing, keep God first, don’t stop dating and don’t go to bed angry,” TaNeiqua said.

“Keep God first and let everything else take its course and you will be fine. Don’t let it get dull, keep it fresh and it will keep the relationship healthy,” Jamare said.

Jamare, 46, is a Wenonah native, Wenonah High School graduate who works as a machine operator at Holman and Barnard Inc. in Birmingham.

How NJ Auto Insurers Are Affected by Advances in Technology