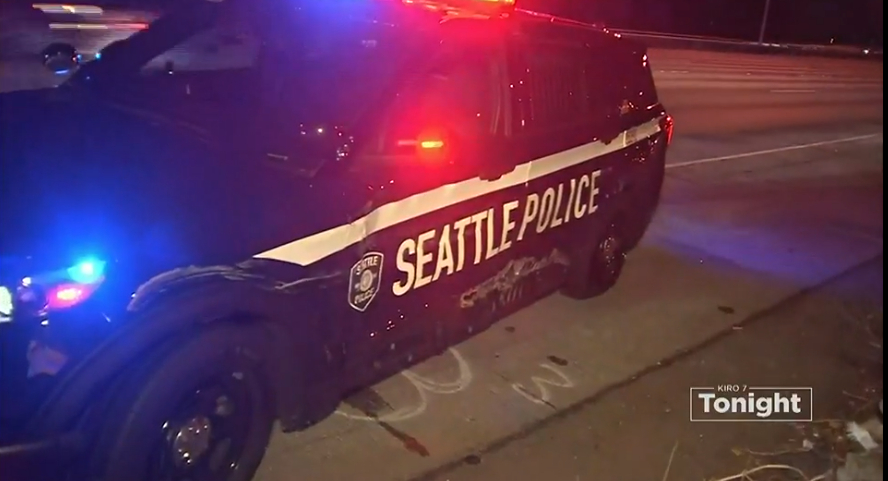 KING COUNTY, Wash .– A man was arrested after a savage wave of crime that included a carjacking and several break-ins and thefts on Thursday night.

At one point, the northbound lanes of I-5 were closed while police were working on two active scenes.

At around 10:30 p.m., a 44-year-old man who allegedly hijacked a tractor-trailer at gunpoint in Tukwila slid a Seattle police officer’s vehicle sideways onto I-5 towards north near Swift Avenue and South Albro Place.

The officer sustained minor injuries and the police immediately began to search for the suspect.

The semi-truck and its 53-foot trailer were found abandoned in the carpool lane near the I-90 and I-5 interchange. Inside, officers found a gun and knife on the floor, blood on the driver’s door handle and what appeared to be a bullet hole in a window.

Shortly after, a state soldier saw a man with no shoes running along the highway. Shortly thereafter, police began to receive reports of a possible car rampage near the scene, followed by a report of a burglary nearby.

The suspect of these crimes matched the description of the man spotted by the soldier.

Police then received a report of a possible car rampage involving the same man in the 800 block of Jefferson Street. A man then reported officers in the 700 block of Cherry Street and reported that someone on the second floor of a nearby apartment building was screaming for help.

Police said the man smashed the building’s glass door with a stone. Once inside, he tried to steal his cell phone from a man, but failed.

He then went up to the second floor, kicked in an apartment door, and threw a rock through a large window to escape.

A man who lived in the apartment, who said he feared the suspect would be seriously injured if he jumped from the second floor, grabbed the suspect and stopped him from jumping.

The suspect then attempted to steal the man’s laptop. After a fight, the man escorted the suspect out of the apartment.

The suspect came down, where the police found him covered in blood and put him under arrest.

“The suspect, who appeared to be in a state of crisis, was taken to Harborview Medical Center for a DUI blood test and treatment for cuts and other injuries sustained during the time of the incident,” said an article on the Seattle Police Blotter. .

The man was held in King County Jail for investigation into burglary, robbery and malicious mischief.