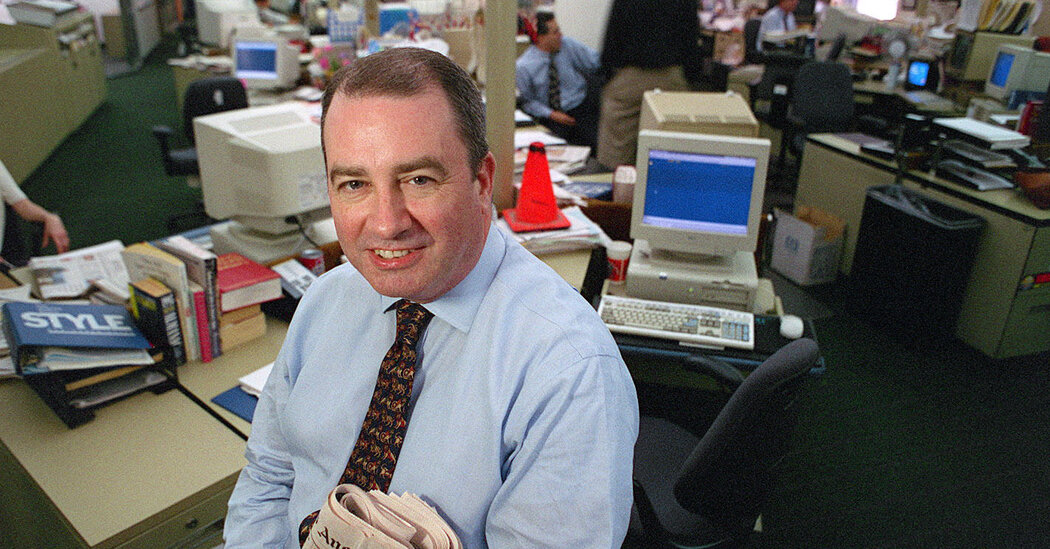 Michael Parks, journalist who rose to lead the Los Angeles Times, dies at 78

Michael Parks, a Pulitzer Prize-winning foreign correspondent for the Los Angeles Times who became the newspaper’s editor, one of the nation’s largest metropolitan dailies, died Jan. 8 at a hospital in Pasadena, California. was 78 years old.

The cause was a heart attack and kidney failure, her son Christopher said.

Mr. Parks reported around the world from 1970 to 1995, first for The Baltimore Sun and then for The Los Angeles Times. While abroad, he chronicled some of the most significant geopolitical events in modern history, including the Vietnam War, the collapse of the Soviet Union, and the dismantling of apartheid in South Africa.

While in Johannesburg for The Times, the white minority government announced in late 1986 that it was expelling him after he documented the brutal segregationist policy of apartheid for two years. As the country moved violently towards historic change, Mr. Parks was the fifth correspondent that year to receive a deportation order.

The Times decided to appeal; the story of the rebellion of the black majority against white domination was too important not to cover. In early 1987, Mr. Parks and Los Angeles editors met in Cape Town with three government ministers to make their case.

Ministers brought out boxes containing 242 articles that Mr Parks had written in 1986. Each was annotated, with every affront to the white regime duly noted. Undoubtedly, the ministers said, Mr Parks had cast South Africa in a negative light.

And yet the ministers found no error in any of the 242 dispatches. In a rare move, they overturned the eviction order and allowed Mr Parks to stay.

His meticulous reporting was again awarded a few months later with the 1987 Pulitzer Prize for International Reporting for what the Pulitzer Committee called his “balanced and comprehensive coverage of South Africa”.

“He was a student of liberation struggles,” Scott Kraft, who followed Mr Parks as the Times’ Johannesburg bureau chief, said in a telephone interview.

Mr. Kraft, now editor of the Times, said that when the scholar Mr. Parks introduced him to his sources, he could see that many of them, especially the exiled leaders of the National Congress African, liked to discuss political philosophy and strategy. with him.

“He had been to other capitals around the world with civil strife, and he really understood the philosophical basis of liberation movements,” Mr. Kraft said.

And another thing: “He never dressed like a cloak-and-dagger pen pal,” Mr. Kraft added. “He always wore khakis and a blue blazer so no one could mistake him for a contestant.”

Michael Christopher Parks was born November 17, 1943 in Detroit, the eldest of seven children born to Robert J. and Mary Rosalind (Smith) Parks. Her father was a Detroit public school teacher, her mother a homemaker.

Michael went to the University of Windsor in Ontario, Canada, where he majored in Classical Languages ​​and English Literature and graduated in 1965. The year before graduating, he married Linda Katherine Durocher, a classmate, who became a librarian. She survives him.

In addition to his son Christopher, he is also survived by another son, Matthew; two brothers, Thomas and James; two sisters, Mary Elizabeth Parks and Mary Constance Parks; and four grandchildren. A daughter, Danielle Parks, died of leukemia in 2007.

After college, Mr. Parks became a reporter for the Detroit News, then worked briefly for the Time-Life News Service in New York. He helped start The Suffolk Sun, a newspaper in the East End of Long Island, in 1966 and after two years landed a job at the Baltimore Sun as a government reporter in Annapolis, Maryland.

His first overseas assignment was in 1970 when The Sun sent him to Saigon to cover America’s last stand in Vietnam.

He later served as head of the Moscow office; Middle East correspondent, based in Cairo; and head of the Hong Kong office. In 1979, he opened the Sun bureau in Beijing. He was one of the first American journalists to be based there after the establishment of diplomatic relations between China and the United States.

The Los Angeles Times hired him from the Sun in 1980 and kept him in Beijing as bureau chief. From there he served as bureau chief in Johannesburg, Moscow and Jerusalem. He moved to Los Angeles in 1995 to become assistant foreign editor, managing the paper’s 27 foreign correspondents.

During his tenure, the paper increased its circulation, expanded its coverage areas, won four Pulitzers, and began to diversify its staff.

But it was a tumultuous time. The Chandler family, who had owned the newspaper for a century, put it up for sale.

Additionally, one of the biggest scandals in the newspaper’s history erupted when the Times devoted its entire October 10, 1999, Sunday issue of its magazine to the opening of the Staples Center. As part of a quiet profit-sharing deal, the newspaper had shared the magazine’s advertising revenue with the center, the subject of its coverage – a blatant conflict of interest that undermined the newspaper’s integrity and outraged staff .

The editor, Kathryn Downing, took the blame. Mr Parks said he only knew about the profit-sharing deal after the fact. But the debacle happened on his watch, and some criticized him for doing nothing once he learned of the affair, such as publishing an article leaking it to readers. In a lengthy Times investigative report into the matter, published on December 20, 1999, Mr Parks said he had “failed” in his job as caretaker and expressed his “deep regret”.

The Tribune Company bought The Times in 2000 and installed its own staff, including a new editor, John Carroll.

Mr. Parks then embarked on a second two-decade career at the Annenberg School for Communication and Journalism at the University of Southern California. He taught and served for two periods as director of the School of Journalism, expanding its international reporting programs and focusing on developing expertise in covering diverse communities. He retired from Annenberg in 2020.