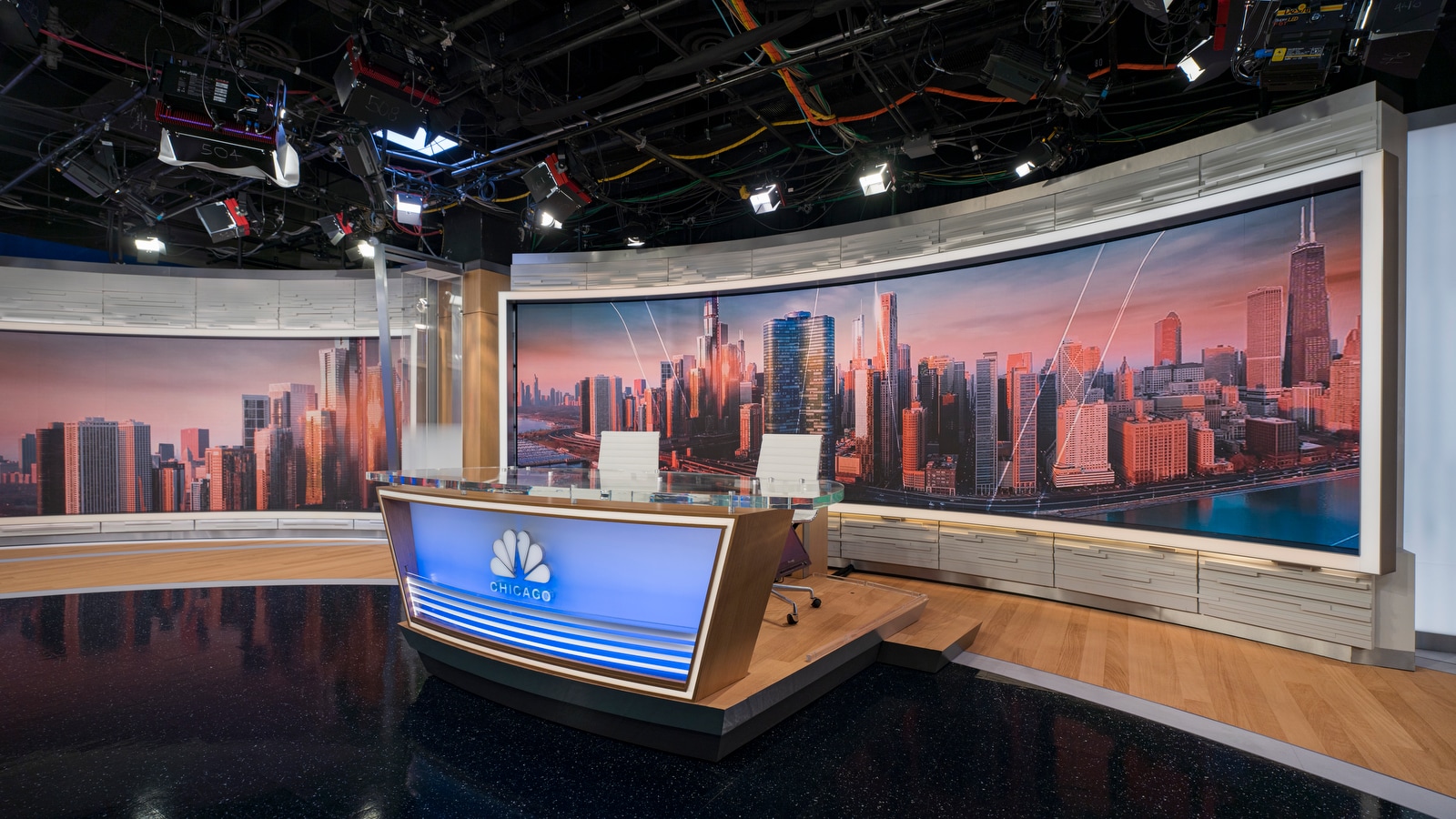 WMAQ, which has studios inside the NBC Tower in downtown Chicago, revamped its existing space with a look that, like other NBC-owned stations, is dominated by video walls and changing elements. of color.

The home base remains in front of a large curved video wall, but with the addition of an internally lit frame and wavy white panels installed above and below, inspired by the waves of the Chicago River and the Lake Michigan, according to designer Jack Morton Worldwide.

On either side of the LED wall are columns of glass and metal, a nod to the skyscrapers the city is famous for.

There’s a new trapezoidal anchor desk with a backlit facade featuring an NBC peacock mounted above the word “Chicago” and a strip near the floor. The entire facade of the office can change color, with a light, deep blue used from late afternoon to evening and orange-yellow in the morning, for example.

Additionally, the peacock and each of its feathers can change color independently, allowing it to be both a subtle white or multi-colored version. It’s also easy to see how these elements could be mixed together for various holidays or special coverage, such as a mix of red, white and blue for elections.

The L-shaped video wall setup that was installed in the studio previously remains, but where it was just black above and below, it now has a matching textured frame and panels. Above is a custom rendition of the distinctive four six-pointed stars that appear on the city flag in a simulated stone carving.

This area, as it was before, is used for both anchor standups and sports and is usually filmed to take advantage of the 90 degree angle where the two networks meet. Adding hardscape around it connects it to the adjacent anchor area, allowing the station to launch consistent throws into space as well.

On the other side of the space is an additional curved video wall, also with a lighted frame and wave panels, which is primarily used for weather and traffic, but can also be used as an alternate anchor area. This is possible because the weather presentation desk has been removed, allowing talents to move freely in front of it.

The camera to the left of this is a new area with an interactive touchscreen set up in front of a series of vertical louvers with a color-changing wall behind. This too can be used for anchor standups, including in combination with the taller on the right.

Connecting all of these spaces are multiple wood-toned areas with gray borders, many of which are curved.

The ground becomes a particularly important element when the video wall to the left of the camera is used for weather or traffic. In these segments, the entire video wall is displayed – the far right filled with a blue vertical bar with the Storm Team logo. This approach is common on on-set video walls used for weather and often helps keep the aspect ratios of weather graphics more consistent.

During morning newscasts, the station alternately uses the video wall and key wall for weather and traffic. During the other slices of the day, weather is done using chroma key and video wall.

When the video wall is used for weather, WMAQ had an anchor joining the forecaster in front of it for a bit of a mix-up. During “NBC News Daily’s” debut, WMAQ’s two cuts also allowed the anchor to join the forecaster there to steer with the weather. Later in the memoirs, the anchor moved to the L-shaped network.

Both of these video walls are also used in 3D shots, typically featuring a brand graphic, skyline view, or a combination of the two.

The main backdrop for the anchor remained, at least after the set launched on September 12, 2022, live camera feeds from various points around the city. In fact, on tight pegs and planes, the whole thing ends up looking almost identical to the old one – the glass form of the desk being the only clue that anything has changed.

In coordination with the new set, the station has also started using different thrust and pullback planes at the start or end of blocks, often ones that incorporate robotic arrow movement with zooming. These are used both at the anchor desk and for bumps.

The new set looks a little bigger and more open than before, even though it occupies essentially the same footprint in a space that was previously part of the station’s newsroom.

Earlier this year, Jack Morton replaced sets at KXAS in Dallas and KNTV in San Fransisco, both of which have newer and larger studio facilities than those WMAQ uses for its newscasts.

This likely placed some restrictions on the design and ability to create the multiple venues with large expanses of colorful, backlit walls often adorned with the oversized NBC peacock feather elements found at these stations.

However, some elements of these designs carried over to WMAQ, such as the video wall frames, banding patterns, and the use of glass to create sculptural elements.

WMAQ had used parts of the set first installed in February 2012 which featured a small array of 3×3 video panels sandwiched between two backlit walls. That fall, the entire back wall was replaced with five vertically mounted video screens with a narrow metal element between each, similar to the look WNBC in New York had at the time.

The studio has seen additional updates over the years, including the installation of built-in touch screens, new decor in the stand-up area, and a discreet network in the studio’s weather center.

Throughout this time, the docking desktop has remained essentially the same, with only minor cosmetic updates made over the years. Prior to its 2012 set, the station had used an editorial set for nearly two decades.