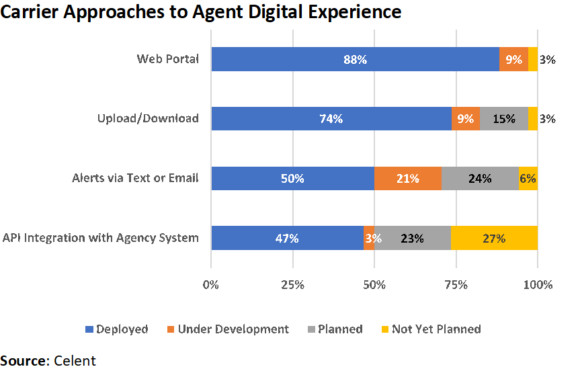 Agent digital experiences are at the forefront of technology strategies for P&C insurance companies, according to an investigative report released by Celent late last week.

Just having a web portal won’t be enough anymore, with 94% of 35 North American operators surveyed by the global financial institution technology research and consultancy firm, saying they want to create above-average experiences for them. agents. And a third of them aim to be “world class,” according to the report, “The digital agent experience: a new battleground in damage insurance. “

About 65% of operators surveyed rated their digital experiences for agents as currently â€œaverageâ€.

Web portals date back to the mid-90s, when carriers started giving officers better visibility into their business volumes, then expanded to provide transactional capabilities, allowing officers to enter new law enforcement applications. , to request amendments, to manage invoicing and often extended to access to commission statements and marketing support.

The survey found that 50 percent of carriers use email and SMS alerts to supplement their web portals, enabling faster delivery of critical information to agents. Of the carriers that have not deployed this capability, most have indicated that they plan to do so.

While uploading and uploading data between carrier and agent systems is now common among most types of carriers, Celent has found that mobile carriers are much less likely to offer this. – only 22%. With the exception of workers’ compensation insurers, almost all said they have deployed upload / download.

Importantly, nearly three-quarters of those surveyed said that integrations between their systems and agency management systems using application programming interfaces (API integration) have been deployed or are underway. planning.

Carriers also have benchmarking software platforms – allowing agents to compare quotes from multiple carriers – and connections to digital insurance exchanges, such as Bolt and Bold Penguin. The Celent report notes that digital exchange platforms go beyond the multiple rating capabilities of benchmarking reviewers, becoming “a more complete distribution solution for operators.” [and] allowing agents to produce digital showcases without having to integrate with several operators.

About these web portals

Focusing on the capabilities of web portals for agents, the report reveals that 68% of the carriers surveyed have full quotes in place for multiple lines.

“One of the most important factors affecting the listing experience is the percentage of requests that can be directly addressed in a submission without the intervention of human underwriting,” the report says.

â€œOne of the most important factors affecting the listing experience is the percentage of requests that can be directly addressed in a submission without the intervention of human underwriting. “

â€œCarriers are rushing to make connections with emerging digital intermediaries to accelerate their entry into new distribution channels,â€ Norris noted. â€œThis will force carriers to improve straight through rates during the quotation process. “

Carriers strive to make quotes easier for agents in other ways, with pre-populating data and streamlined application design being the most common strategies.

The capabilities to advise agents on coverage and appropriate client options or downloading and extracting data from ACORD applications are not yet common, but most operators plan to implement them at some point in the future. the future, Celent reports.

What is not happening: complaints and motive

One area that deserves more attention from carriers is giving agents more visibility into the complaints process, allowing them to fulfill their role of ‘advocate and adviser during what is often a defining moment in the relationship. of a customer with a carrier, â€says Celent.

While commercial line carriers almost universally give access to losses and all types of carriers allow agents to receive basic information about the status of the claim on demand, Celent suggests giving visibility to the ratings of the claimant. non-sensitive expert and issue alerts outside of the web portal to provide timely information to agents on the development of claims.

Also recommended: digital measures to help agents strengthen their role in the loss control process. Measures could range from giving agents visibility into carrier loss control recommendations to giving them more access to business intelligence tools and data on individual customers, agency business volume or carrier as a whole.

Throughout the report, Celent analysts offer further recommendations for features that don’t exist in the P&C insurance industry today, including gamification and white-label portals. Almost no carrier currently offers agents a white label solution for their customers, but a quarter are considering it.

Define gamification as an ‘element of scoring or competition [that] is nested in the process of selling or serving policies, â€Celent finds that these capabilities remainâ€œ almost nonexistent â€despite their potential to encourage positive behavior.

The survey report also notes the preference for desktop-focused web portals over mobile portals and downloadable mobile apps in agent experiences with operators. Even though downloadable apps are increasingly popular for direct experiences with policyholders, Celent does not see the trend spilling over to digital agent experiences based on the survey results. Only 27% of operators said they have deployed mobile apps for agents. Other work from Celent reveals that agents are desktop laptop users when it comes to how they spend their work days.