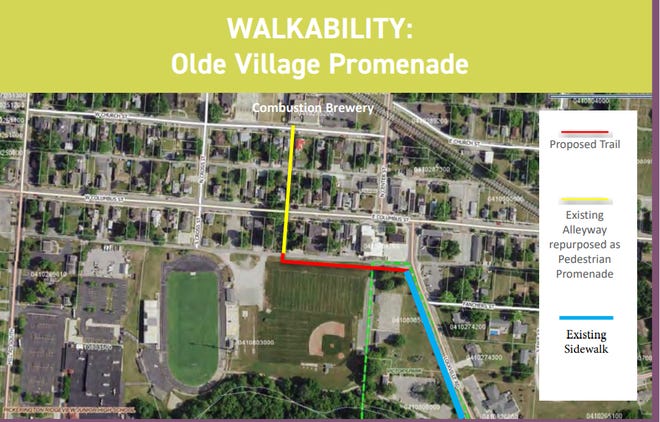 A recent update to the Pickerington Comprehensive Plan calls for a better balance of commercial, mixed-use and industrial development throughout the city, as well as efforts to strengthen Olde Pickerington Village and connect points of interest via multi-use trails .

The process was facilitated by a $ 83,000 contract with Envision Group LLC, which helped develop an online survey and virtual workshop that gathered nearly 1,000 responses from residents and business owners on the types of issues. equipment and land use they want in various parts of the city.

This was the first such company in Pickerington since 2000.

â€œWith COVID, we had to go virtual,â€ said city development director Dave Gulden. â€œIt went very well. In public meetings for something like that, we could involve 50 people. Our survey received 577 responses, and after the survey we had a virtual workshop that allowed people to choose certain amenities they want and certain types of amenities that attracted 407 participants.

Gulden said the dominant themes that emerged from the survey and town development staff were that people want a balance between residential development and other types of development as well as a vibrant Olde Pickerington village and a connected community.

â€œBalanced growth was a main theme,â€ said Gulden. â€œWe are primarily a residential community, but there is a need to balance land uses to increase commercial, mixed-use and light industrial development. “

Public comments and planners agreed that the city should focus on developing medical facilities along the refugee route, he said. The strategy aims to build on a corridor that already has growing medical facilities at OhioHealth’s Pickerington medical campus at 1010 Refugee Road and the Ohio State University ambulatory care facility Wexner Medical Center at 1025 Refugee Road.

In addition, the plan includes the integration of more commercial, mixed-use and light industrial developments on the east, southwest and southeast sides of the city.

â€œResidential is still attractive in these areas, but as a city we want balanced development,â€ said Gulden. “So we want more of a mix in these areas.”

In the city center, the plan calls for â€œinfillâ€ development, or the installation of new office and other light commercial and industrial buildings in undeveloped parts of Olde Pickerington Village.

â€œThe village is very unique due to the fact that it is made up of small, mostly residential buildings,â€ Gulden said. â€œThis plan is about doing focused, pedestrian-scale development with things like parking behind buildings and keeping Olde Pickerington’s traditional design elements, even though it’s about a new building.

Gulden said the plan also calls for zoning changes that would “facilitate the development” of Olde Pickerington Village for uses beyond residential.

Olde Pickerington and other points of interest, such as city parks, are also essential in making the city a “more connected community,” he said.

Gulden said many survey and virtual workshop respondents wanted more multi-use trails and sidewalks so people could walk and cycle to businesses, parks and other points of interest in Pickerington.

â€œPeople have requested that existing roads be striped for trails and (for) multi-use trails to be added with new developments,â€ he said.

The plan includes the possible development of a “boardwalk” that would provide a walking path from the Combustion Brewery & Taproom site, 80 W Church St., Suite 101, to Victory Park, which is across from Pickerington City Hall, 100 Lockville Road.

â€œIt would be for pedestrians only,â€ Gulden said. â€œYou get rid of the vehicles and provide a walking area. Along this area, you could potentially have street vendors, artwork, pop-up events, and things like that. “

The Olde Village was the main focus of Jason Diehl, who lives on Church Street and operates a hand-held e-commerce business, The Ritzy Rose, 140 W. Borland St. # 100.

Diehl said he wanted better connectivity to help make Olde village more vibrant, as well as diversity of land use.

In addition, he believes the city can take advantage of business success stories such as Combustion and Porter’s Coffee House & Bakery, 194 W. Church St., to help recruit future economic development.

â€œOverall this has a great direction for the city,â€ he said. â€œPickerington is a city with potential. If done right, it can compete with every other city in central Ohio. This lays the foundation for intentional and strategic growth.

â€œThis plan will help target the city’s needs and help it develop in a more natural way. It lends itself to greater diversity in land use, (and) it reflects strengths and unifies community.

While the overall plan provides advice and ideas for improving development and specific land uses, Gulden said it was largely conceptual.

“It’s high level and general,” he said. “It allows us to pivot where it’s needed … and it’s flexible. It’s an advice and guidance document. It doesn’t lock us into one thing.”

He said other elements of the plan state that the city should continue to monitor the impact of traffic jams and safety on residents and businesses.

He also says the city should not plan any development at Coyote Run, an approximately 920-acre piece of land located partly in the City of Pickerington and partly in Violet Township, bordered by the Pickerington, Allen and Busey roads.

The land is owned by David Hague, who, along with his girlfriend, Tammy Miller, wants to return the entire property to its natural state and ensure it is preserved for up to 500 years.

While the new comprehensive plan calls for the potential construction of multi-use trails around the perimeter of Coyote Run, it calls for grounds maintenance in accordance with Hague’s wishes.

â€œWe recognize that this will not be developed in a traditional sense,â€ Gulden said. “It is recognized as a green space and a conservation area.”