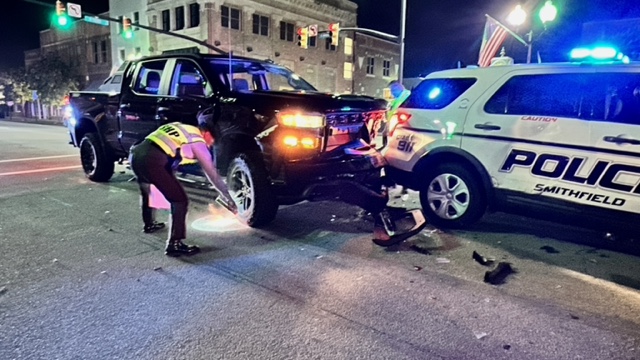 SMITHFIELD – A Smithfield police officer was involved in a traffic accident with an innocent motorist while chasing another vehicle. Just before 2 a.m. Sunday, Garner police were involved in a brief pursuit with a vehicle along US 70. Garner’s officers quickly called off the pursuit.

Minutes later, Clayton police spotted the vehicle on US 70 and chased the car for a short distance before calling off the chase again.

Smithfield Police spotted the same vehicle entering their city limits on US70 and began pursuing it downtown.

Constable AJ Berna was driving a Smithfield Police Ford SUV patrol vehicle with the blue light and siren activated while pursuing the suspect eastbound on Market Street. The suspect did not yield to a red light at Market Street (US 70) and Third Street and sped through the intersection.

Officer Berna drove through the same red light at the intersection and collided with a 2021 Chevy pickup truck traveling north of Third Street and driven by Anner Nolbert Cerritos-Gonzales of Brooklyn, NY. At the time of the collision, the pickup was cleared, according to State Highway Patrol, which was called to investigate the accident.

The police officer and the three occupants of the van were not injured. The suspect pursued by the police fled.

A soldier estimated that Constable Berna was driving 30 miles per hour when the collision occurred. The van was going 5 miles an hour.

The accident report said the officer did not yield at the intersection, but no charges were filed by the State Highway Patrol.

Smithfield Police Chief Keith Powell said: ‘Unfortunately with as many miles as officers travel, occasionally accidents do happen. Fortunately, no one was injured in the accident. I cannot comment on disciplinary action as this is a personnel issue, but the agency will review these types of situations to ensure we can prevent future incidents.

Know your options after a car accident