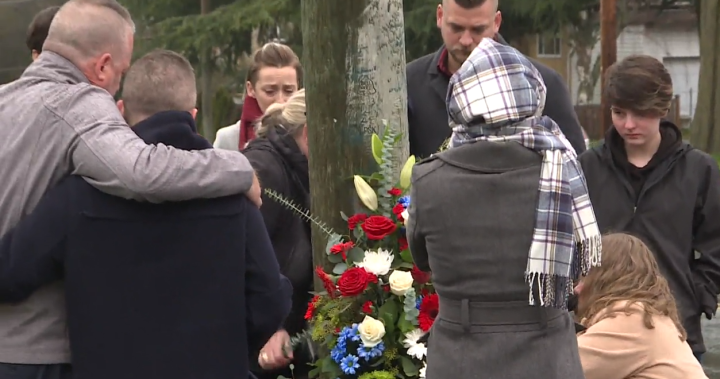 There’s renewed pressure to improve road safety in Saanich, after a cyclist broke his leg Monday at the same spot a 16-year-old boy was killed two months ago.

Paul O’Callaghan was cycling home from work on Monday when he was hit by a trailer being towed by a van driver.

“(I) went to catapult in the air, then landed on concrete, asphalt, then grass,” O’Callaghan told Global News.

Several witnesses came to his aid, including a woman who O’Callaghan said held his head, stroked his forehead and tried to calm him down.

“I noticed she was crying too, I saw she had tears, and I said to her, why are you crying? And then she told me who she was,” he said.

The woman turned out to be Crystal Bourque, the mother of 16-year-old Kaydence Bourque, who was fatally beaten in the same spot – a short walk from his home – exactly two months earlier.

“I couldn’t believe someone with such a fresh memory of such a tragic incident would care for someone and provide care and compassion,” O’Callaghan said.

“It was really emotional to have her care for me, when she was probably also in pieces because of what was going on. It must have been a terrible flashback for her.

In a statement to Global News, Bourque described seeing the collision and running to help by calling 911 — and the wave of emotion that washed over her afterward.

“I found myself sobbing uncontrollably and shaking; my stress skyrocketed. Every day has been difficult and I live in constant fear of the sound of sirens or flashing lights,” Bourqe said.

Bourque said the crash that took her son left her living with post-traumatic stress disorder, and following the O’Callaghan crash she said she couldn’t understand why anything had been done at the accident site to improve safety.

“We moved to this neighborhood nine years ago. Traffic has grown exponentially. It has become a thoroughfare for many commuters. Some of the speeds I witness on this street are way above the posted limit,” Bourque said.

“This street is traveled on foot and by bicycle by many people and countless children. It leads to four different K-12 schools. I feel like it should be treated like a school zone. Reduce the speed limit, add traffic signs and speed bumps… Everyone is someone’s child and I don’t want another mother to suffer what I am.

Child killed after being hit by vehicle in Vancouver Island driveway

In the wake of Kaydence’s death, members of the Saanich community rallied to pressure the city to accelerate its 30-year active transportation plan, which includes road safety improvements.

Basil Langevin, organizer of the Safer Saanich group, told Global News he was frustrated that little had happened since then.

“The best time to fix this safety issue was years ago when this lighted crosswalk was installed,” he stands at the crash site.

“The second best time to fix this was Tuesday morning, the day after the Kaydence hit. That was two months ago. Two months ago a young boy was killed here.

Langevin said the municipality is mired in its master plan, which includes multimillion-dollar infrastructure improvements, and needs to find quick fixes on the street while more expensive planning work progresses through the process.

“Go out into the street with a bucket of paint, pylons, traffic cones, wherever there is a problem,” he said.

“These are not accidents, these are fatalities.”

‘I have no words’: Over 150 trucks form memorial convoy for Nanaimo boy killed on bike

Saanich Mayor Fred Haynes called the collisions “total heartbreak” and said the municipality is committed to accelerating the timeline of its active transportation plan.

“We are doing everything we can to look into what happened in these circumstances,” Haynes said.

Haynes said the city was limited in what it could do before the inquest into Kaydence’s death was completed, but expected a report into the matter from the traffic committee of Saanich be presented to the board in early March.

“I’m so sorry this happened, and we’re doing everything we can to address it in a way that provides the right solutions,” Haynes said.

O’Callaghan is recovering at home from the physical and mental trauma of the accident.

But he says urgent action is needed to avoid future collisions like the one that left him with a broken leg.

“We are a growing population, density is increasing, there are more and more cars on the road and there are definitely more bicycles these days,” he said.

“I think Saanich and Victoria need to address these issues urgently, not have five-, 10-, or 30-year plans. Something that must be done now.