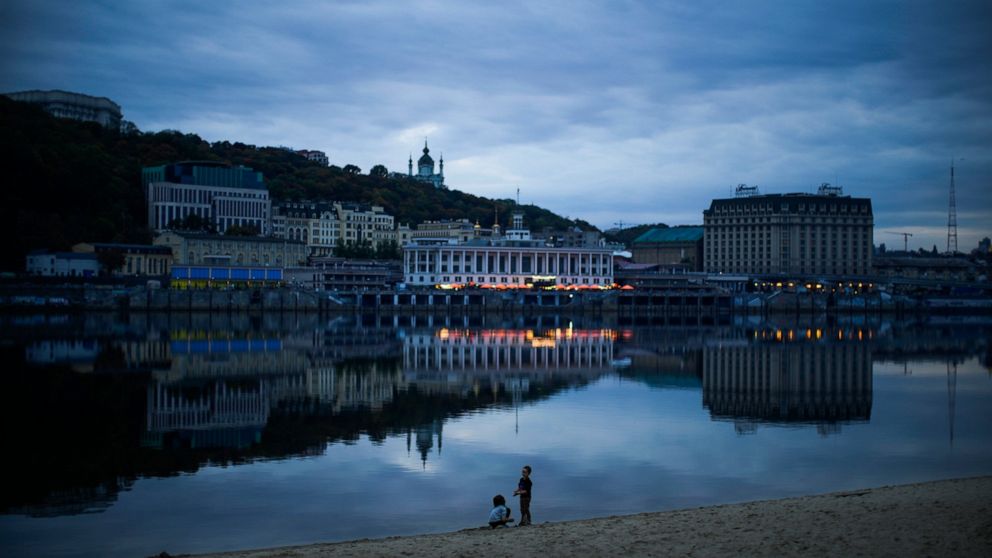 The intense, hours-long attack marked a sudden military escalation by Moscow. It came a day after Russian President Vladimir Putin called Saturday’s explosion at the huge bridge linking Russia with its annexed territory of Crimea a “terrorist act” orchestrated by Ukrainian special services.

At least eight people were killed and 24 were injured in just one of the Kyiv strikes, according to preliminary information, said Rostyslav Smirnov, an adviser to the Ukrainian Interior Ministry.

The sustained barrage on major cities has hit both residential areas and critical infrastructure, pointing to a major surge in the war amid a successful Ukrainian counteroffensive in recent weeks. It came hours before Putin is scheduled to hold a meeting with his security council, as Moscow’s war in Ukraine nears its eight-month milestone and the Kremlin reels from humiliating setbacks on the field of battle in the areas he tries to annex.

Some of the strikes hit near the government quarter in the symbolic heart of the capital, where the parliament and other major landmarks are located. A glass tower housing offices was badly damaged, most of its blue-tinted windows blown out.

Residents were seen on the streets with blood on their clothes and hands. A young man in a blue jacket sat on the ground as a doctor wrapped a bandage around his head. A woman with bandages around her head had blood all over the front of her blouse. Several cars were also damaged or completely destroyed. Air raid sirens sounded repeatedly across the country and in Kyiv.

The General Staff of the Armed Forces of Ukraine said 75 missiles were fired at Ukrainian targets, 41 of which were neutralized by air defenses.

The targets were civilian areas and energy facilities in 10 cities, Zelenskyy said in a video address. “(The Russians) purposely chose such a time and such targets to inflict the most damage,” Zelenskyy said.

The morning strikes sent Kyiv residents back into bomb shelters for the first time in months. The city’s subway system shut down rail services and made stations available once again as bomb shelters.

As air raid sirens continued throughout the war in major Ukrainian cities across the country, in Kyiv and other areas where there were months of calm, many Ukrainians began to ignore their warnings and go about their normal business.

That changed Monday morning. The attacks arrived in Kyiv at the start of the morning rush hour, as commuter traffic began to pick up. At least one of the affected vehicles near Kyiv National University appeared to be a commuter minibus, known as a “marshrutka”, and a popular if often crowded alternative to the city’s bus and metro lines .

Nearby, at least one strike landed in popular Shevchenko Park, leaving a large hole near a children’s playground.

Lesia Vasylenko, a member of Ukraine’s parliament, posted a photo on Twitter showing that at least one explosion occurred near the main building of Kyiv National University in central Kyiv.

Associated Press reporters in Dnipro saw the bodies of several people killed at an industrial site on the outskirts of the city. Windows in the area had been blown out and glass littered the street. A telecommunications building was hit.

Ukrainian media also reported explosions in a number of other locations, including the western city of Lviv which served as a refuge for many people fleeing fighting in the east, as well as in Kharkiv, Ternopil, Khmelnytskyi, Zhytomyr and Kropyvnytskyi.

The day before, Putin had described the attack on the Kerch bridge towards Crimea as a terrorist act perpetrated by the Ukrainian special services. In a meeting on Sunday with the chairman of the Russian investigative commission, Putin said “there is no doubt that this was a terrorist act aimed at the destruction of civilian infrastructure of a critically important”.

The Kerch Bridge is strategically important to Russia, as a military supply route to its forces in Ukraine, and symbolically, as an emblem of its claims to Crimea. No one has claimed responsibility for damaging the 19 kilometer long bridge, the longest in Europe.

Amid the assault, Zelenskyy said on his Telegram account that Russia is “trying to destroy us and wipe us off the face of the earth”.

The attacks looked set to bring a new wave of international condemnation to Russia.

German Chancellor Olaf Scholz’s spokesman, Steffen Hebestreit, said the Group of Seven industrial powers will hold a video conference Tuesday on the situation to which Zelenskyy will respond. Germany currently chairs the G-7.

Ukrainian Foreign Minister Dmytro Kuleba halted his tour of Africa and returned to Ukraine, saying on Twitter that the attacks represented “terror on peaceful Ukrainian cities”.

Some feared Monday’s attacks were just the first salvo in a new Russian offensive. The Ukrainian Ministry of Education has announced that all Ukrainian schools must switch to online lessons at least until the end of this week.

Sabra Ayres in Kyiv, Vasilisa Stepanenko in Kharkiv, and Justin Spike and Yesica Fisch in Dnipro contributed to this story.