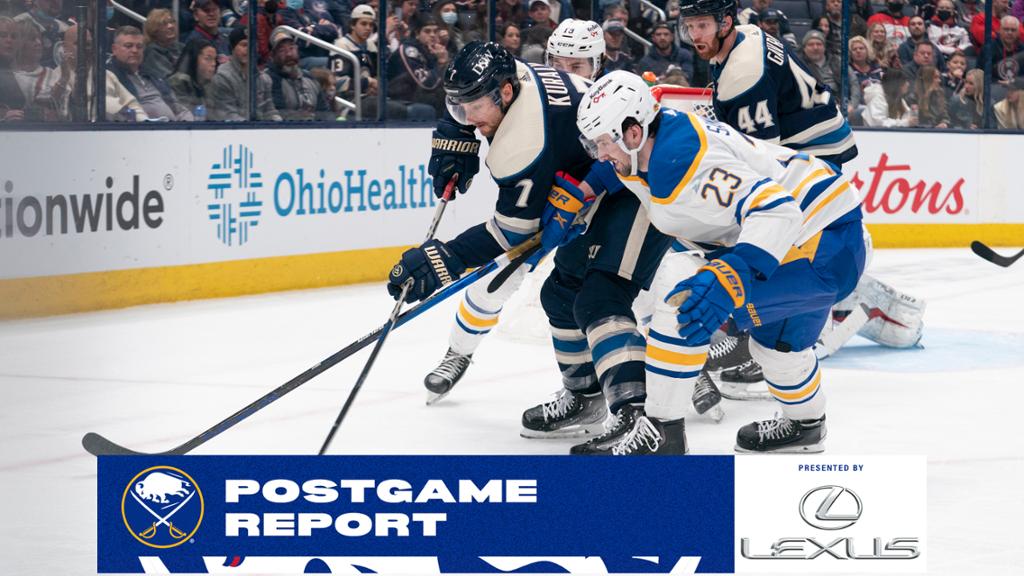 Sabers unable to adapt in loss to Blue Jackets

COLUMBUS – Kyle Okposo was surrounded by three defensemen as he hit a loose puck into the blue paint on Sunday, unknowingly sending the puck over the goal line in the process.

Okposo’s goal – confirmed only after a video review – cut the Sabers’ deficit to 5-3 against the Columbus Blue Jackets with 32 seconds left in the second period at Nationwide Arena. It was also an example to follow on a night when the Sabers were not at their best.

“Okie is probably the easiest visual to look at and see, he knows how to play tired,” Sabers coach Don Granato said. “He is a very intelligent and experienced player. He knew when, effectively [to say]’OK, I’m going to have a push.’

“…That’s the difference. He knows how to pick the right spots even though he might not have his legs. That’s where his experience comes through in a game like today.”

Granato said learning to adapt to fatigue was the main lesson of the Sabres’ 7-3 loss to the Blue Jackets. It was the Sabers’ second straight game, following a 5-3 loss to the Colorado Avalanche at home on Saturday.

The Sabers held off a first-period push from the Blue Jackets – which included defenseman Dean Kukan’s opening goal – and took the lead with goals from Marc Pysyk and Tagus Thompson. Thompson’s goal, scored with 2:46 remaining in the period, came on the Sabres’ second shot.

The Blue Jackets responded just 10 seconds later with a Boone Jenner score, the first of four straight goals that decidedly tipped the game in their favor.

“We just haven’t adapted to not feeling your game and you have to,” Granato said. “That’s probably your biggest growth element for nights like this is that you can’t try to play the same game you played last night when you’re battling fatigue.

“You have to play smarter and more efficiently and we haven’t adapted to that.”

Kukan buried a slap shot from the point to give the Blue Jackets the lead early in the second period. Jenner forced a turnover to start the streak that led to a goal from Zach Werenski, which was followed by a breakaway goal from Brendan Gaunce.

“I think our defensive habits were bad – to put it mildly – tonight,” Okposo said. “We didn’t help 41 at all there. We didn’t help Andy at all. That summed up the game here. We just weren’t good defensively, we were swinging all over the place. Our attention to detail didn’t was not good. And that’s where we lost the match.”

The Sabers outshot the Blue Jackets 18-7 in the third period but couldn’t make up the deficit. Gustav Nyquist scored an empty-netter in the final minute and Justin Danforth added a final goal with four seconds left.

“This year we knew there would be ups and downs, but that’s not acceptable,” Okposo said. “It’s not like we didn’t work hard. We were playing hard. We just mentally weren’t where we needed to be to play this game.”

Dahlin scratched due to injury

Jacob Brison took Dahlin’s place on a defensive pair alongside Henri Jokiharju in Dahlin’s absence. Jokiharju was elevated to the top of the power play unit.

Thompson scored his first NHL hat trick against Colorado on Saturday. He reached the 20-goal mark for the first time in his career as a rappel.

The goal was similar in nature to the three goals Thompson scored against the Avalanche – a hard, fast shot from the middle of the offensive zone.

The Sabers visit the Montreal Canadiens on Tuesday. Coverage on MSG begins at 7 p.m. The puck drops at 7:30 p.m.