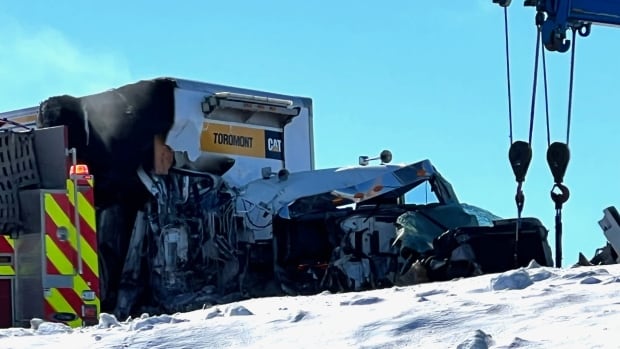 Dozens of tractor-trailer trucks are stranded on the Perimeter Highway west of Winnipeg after a two-vehicle collision sparked a fire on a bridge over the Assiniboine River, RCMP say.

The crash occurred between a cube van and a semi-trailer truck that was believed to be carrying railroad ties, RCMP spokesman Cpl. said Julie Courchaine.

The van was on fire, while the truck dumped some of its cargo onto the road.

No one appears to be seriously injured, Courchaine said in an email.

A city spokesperson said the Winnipeg Fire Paramedic Service responded to reports of the collision at 10:48 a.m.

Several fire crews and devices were sent to help, the spokesperson said in an email.

Firefighters brought the blaze under control shortly after noon, the spokesperson said.

With northbound lanes blocked by the collision, which occurred between Oak Forest Crescent and Roblin Boulevard, vehicles waiting to pass were pinned down for about a mile early Friday afternoon.

A tow truck was also on site.

The gendarmerie had asked people to avoid the area just before noon on Friday.

#rcmpmb are currently at the scene of a collision that is blocking the northbound lanes of the Freeway perimeter between Roblin Boulevard and Portage Avenue. Please avoid the area. pic.twitter.com/1IPASiQQQn