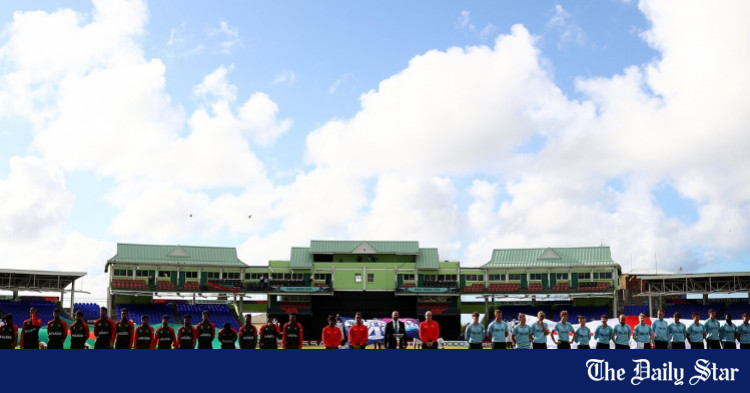 Bangladesh U-19 team and England U-19 team pose before the match. Photo: CIC Twitter

Bangladesh U-19 team and England U-19 team pose before the match. Photo: CIC Twitter

Defending champions Bangladesh started the ICC Under-19 World Cup campaign in Group A with a seven-wicket defeat to England in Basseterre, West Indies on Sunday.

For all the latest news, follow the Daily Star’s Google News channel.

Earlier, Bangladesh fell early on after opting to beat. Boyden knocked out both fly-half Mahfijul Islam (3) and Ariful Islam (4). Bangladesh kept losing wickets at regular intervals and at one point were shocked 51 for 9 inside 25 overs.

However, a final stand of 46 points between Ripon Mondol and Naimur Rohman helped Bangladesh post nearly a hundred. Naimur was the last batter to be dismissed after scoring 11 while Ripon had the best score with 33 of 41 balls, hitting five fours and one six, and ultimately did not come out.

It was a poor batting display from the young Tigers where only four hitters were able to hit the double-digit mark.

Rakibul Hasan and his squad will face Canada in the second group match on January 20 before facing the United Arab Emirates on January 22 in their final group match.

Vincent Price breaks the silence and asks forgiveness at the dinner of the best donors: “We should have taken more”